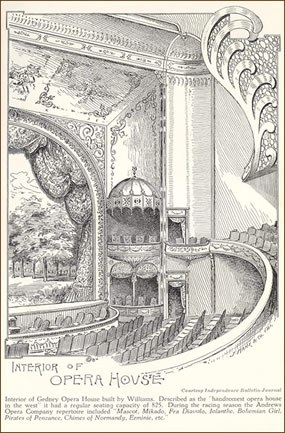 Interior of the Gedney Opera House

The motion picture arrived in Buchanan County in much the same way as it did in most small towns across the heart of the country.  As word of mouth spread the lucrative lure of showing moving photoplays, existing music halls and opera house scrambled to equip their auditoriums with projection equipment.

By 1910, the motion picture had arrived in Independence, at two different venues.  While few details have been documented on the ELITE THEATRE or the GEM THEATRE (the latter of which was managed by J.S. Basset, who had left his post at the Gedney Opera House), they were certain to have been popular attractions.  Both occupied already existent store fronts, proof of their low-cost creation.  It is unlikely that either had a sloped floor or permanently fixed seating.  A sure sign of the earnest beginnings of these two cinemas may have been the announcements for the Gem’s current attractions which appeared in the local Bulletin Journal and Conservative newspapers only within the context of Daily Events columns.  Full-scale playbill advertising was only in evidence for GEDNEY OPERA HOUSE performances.  In 1921, motion pictures had arrived at the Gedney itself, playing along with touring legitimate theater.  In later years it was renamed GRAND THEATRE.

ALLERTON THEATRE was located at 314 1st St. E in the Wise Block building and sat 350.  Ticket prices were a dime or fifteen cents.  In later years it was renamed IOWA THEATRE.

As the popularity of motion pictures grew in the 1920’s, the Gedney and Allerton theaters flourished.  The Gem and Elite, however, not possibly as comfortable as their larger competition, found the going rough and ultimately closed.

By the close of 1920’s, every city in the county had a quickly converted auditorium now capable of projecting motion pictures, or an entirely new facility built specifically for its exhibition.  Unlike the larger two theaters in Independence, however, which screened moving pictures each and every evening, theatres in smaller outlying towns might do such on just one or a couple of evenings a week.

GRAND THEATRE was purchased by Robert and Dorothy Malek and March 3, 1945 burned to the ground with the Gedney Hotel block.  The MALEK THEATRE opened in 1947 on land previously occupied by the Grand Theatre and was constructed in the still popular style of the age – Art Deco.  The Malek was part of what was known as the Gedney Block, which contained a theatre and grand hotel called the Gedney Hotel, which was a getaway for wealthy patrons who came from larger cities to gamble at a local horse track, “Rush Park”.

MALEK THEATRE was a patron’s dream for that era, containing two rooms for private viewings, each with doors and thick paned glass to eliminate sound in or out.  There is a stadium floor from the balcony to the front seats that permitted a clear view of the screen for all 862 seats.  Then came the decorating – an artist and decorator from California  painted a lovely scroll around the outer lobby ceiling.  A pretty border was also hand painted in the ladies restroom.  Red and gold wool carpet was in the inner lobbies, up the ramps and down all the aisles.

5 doors separated the outer lobby and inner lobby so that if a crowd gathered for the second show their noise didn’t’t bother the people inside.

Stripes of different widths in the colors of the carpet and seats went up the ramp wall and across the front of the balcony.

A photograph of Independence was taken from the air with Bob flying his plane and Ray Walton taking the photo.  Ray blew the photo to 21×14’ and it was placed in the inner, lower lobby with drapes on the side and a long planter on the floor beneath it filled with “Mother-in-Law Tongue” in the planter..a plant that does not need much light.  They named their photography company “Hawkeye Aerial Photo” and made many photos of all the communities in the county.

The theatre cost $140,000 to build, and it took a year to complete.  Opening night was a thrill.  Baskets of flowers lined the wall of both lobbies and up the ramps.  A lady that came to the opening said when she entered, “What it this place, a funeral home?”

Every seat was filled.  There was a Master of Ceremonies and a band.  Bob greeted everyone from the stage.  It was billed as the most beautiful and comfortable theatre in the state.

One of the most memorable scenes from “The Ten Commandments” was when Moses was taking his people out of Egypt.  They were being chased by Pharaoh and all of his chariots.  God instructed Moses to hold out his hands over the Red Sea and the waters parted and his people crossed over to the other side on dry land.  Every school child in the county was invited to view this picture at a “special matinee”.  School buses dropped off the children.

By 1947 the first commercial broadcasts of television were a reality.  The number of American homes possessing television sets were meager, only about 10,000 at the end of 1946.  But within five years, those figures had skyrocketed to 22,663,068 and television was clearly seen as a threat to motion picture theatre exhibition, as well as to radio and newspaper mediums as both news and entertainment sources.

The motion picture saw the challenge of television and met the same with experiments designed to lure the public back into theatres.  One of those lures was the three dimensional, or 3-D picture.  The Malek showed several of these films in 1953.

Robert Malek retired in 1978 and shortly thereafter, sold the Malek.  The theatre underwent a duplexing in the mid 1980’s, a nationwide phenomena common today, despised by theatre purists for the architectural disrespect it pays aging auditoriums, but much desired by theatre owners who’ve seen the arrival of yet another threat to their

livelihood, the video cassette.  Despite the investment, the newly split theatre closed for a short time in 1985, leaving the county with no theatre.  Unfortunately, the drive-in theatre (North of Hazleton) closed that year as well, victim of changing tastes and again, the overwhelming selection and sit-at-home convenience of renting view cassettes.

2006 – announcement made of a new theatre being built south of MHI in the newly built Heartland Acres project.  LTC of Jesup has announced the STARLITE. 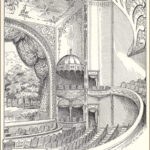 Interior of the Gedney Opera House