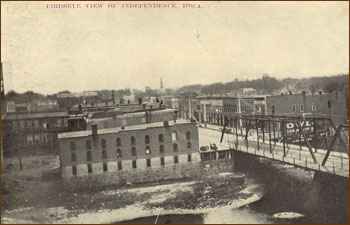 Old bridge over the Wapsi

The Wapsipinicon River became the first road to Independence when Rufus B. Clarke, his Indian wife, and their sons, Seth and Mason, walked up its frozen surface from Quasqueton to Independence in March 1846.

The early records of bridges are incomplete.  To date, records indicate this bridge is at least the fifth bridge to span the river near or at the location.  Early bridges were subject to swollen streams, ice in winter and spring, plus the normal wear and tear of every day use.  Bridge building became a major industry and yearly project of the first settler.

The spring floods of 1865 removed the bridge, forcing residents to devise another method of crossing the river.  Sam Sherwood built a ferry that filled this transportation need.  To accommodate pedestrians, a four foot wide foot-bridge was built where the Second Street bridge now stands.  Ike Preble’s daughter, while walking across the bridge, became dizzy watching the swirling flood waters and fell into the river.  Her hoop skirt filled with air, acting as a life preserver, and kept her afloat.  A.D. Guernsey, seeing her plight, swam to her aid and assisted her to land.

On occasion, desperate measures were used to hold a wooden bridge in place as swollen waters tore at the base.  Independence citizens banded together and filled the bridge full of the rocks gathered from surrounding farm fields.  The weight of the rocks saved the bridge.  No mention was made of where the rocks were disposed of.  Could we be seeing them in the water below the present bridge?

The spring of 1873 washed the dams out at Littleton, Independence and Quasqueton.  The Wapsi was said to be the ‘poorest dammed river in this part of Iowa.’

Several years later a circus arrived from the west, complete with two elephants pulling the wagons.  After being assured the wooden planks would support the weight of an elephant and heavy wagon, the caravan continued eastward.  One elephant crossed safely.  But as Romeo approached the eastern end of the bridge, the planks gave way, plunging the animal to the rocks below.  After thrashing about and trumpeting, the crazed animal was coaxed to his feet and out of the river.  Years later, while performing, Romeo became wild, refusing commands, terrorizing women and children, and chasing horses and buggies in the streets of Chicago.  He was caught later, and returned to his owners.  No one could understand why he was standing by a wooden board sidewalk, refusing to cross it.  People of Independence knew the answer!

The iron bridge of 1892 was built while the Gedney Hotel, the electric street car, and the Illinois Central depot were being completed.  D.H. Young was the contractor, and the cost of this structure was $13,000.  The glacier erratic foundation stones can still be seen on the western end of the bridge.

The present bridge was completed in 1917 at a cost of $43,682.09.  Some of the men who helped construct the bridge were: Kappan, Simmons, Wackerbarth, Blamer and “Hank” Oliver, who lead the traffic parade across the new bridge.

In 1986 the same bridge was updated and re-dedicated with a program by the City of Independence.  This bridge has seen many floods and still stands as a tribute to the builders of the bridge. 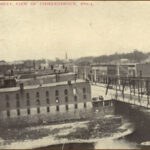 Old bridge over the Wapsi 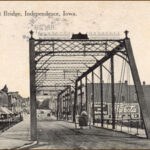 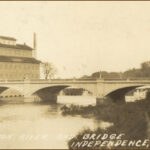 New bridge over the Wapsi 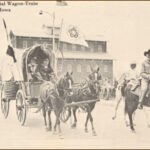