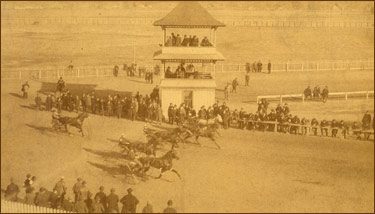 “Axtell” was foaled on March 31, 1886.  His sire was William L., a son of George Wilkes, who was one of the best producing sons of Rysdky’s Hambletonian, the founder of the trotting horse family of America.  His dam, Lou, was by Mambrino Boy out of Bird Mitchell.  As a colt he was plain-looking, willful, and stubborn.  The great flight of speed which he exhibited as a two-year-old was not at first apparent and just before the spring of 1888 Williams offered him for sale at $300, but could find no buyer.

Axtell was not hitched to a sulky until May 26, 1888.  At the time of his appearance at Keokuk he had not trotted forty times to a sulky.  His gait, according to an expert, was not artificial, ‘taught by patient and long continued effort, but perfectly natural without the aid of weights and boots.  A month after his sensational performance at Keokuk, Axtell won the three-year-old trot at Des Moines, but was declared ineligible because he was only two years old.  Later in 1888 he trotted at Independence, Cedar Rapids, and Lexington, Kentucky, and had a two-year-old record of 2:23 when the season closed.  Early the following spring Williams brought Axtell out for road work.  On July 2, 1889, Axtell was started against Sable Wilkes’ three-year-old record of 2:18 at Saint Paul.  Ran the mile in 2:15 ½; broke the record of Sable Wilkes, and Manzanita.  The influence of Axtell on Iowa trotting was apparent to all.  A year or two ago the horse could have been bought for $250, but today an offer of $65,000 was refused and nothing less than $100,000 or $125,000 will buy him.  (more of his times are recorded in “The Palimpsest” a monthly historical pamphlet published by the State Historical Society of Iowa – Oct. 1965)  This publication is still for sale by the Buchanan Co. Historical Society  P.O. Box 321  Independence, Ia 50644 for $10.00.  Axtell was sold for $105,000 to Colonel John W. Conley October 11, 1889 and retired to stud service with a fee of $1000.

Allerton was the son of Jay Bird who, like the sire of Axtell, was a son of the mghty George Wilkes and inherited the strain of Rysdyk’s Hambletonian.  On his dam’s side Allerton was more strongly bred than Axtell for Gussie Wilkes was by Mambrino Boy out of Dora Wilkes, the latter tracing her blood through George Wilkes to Hambletonian.  Allerton was a handsome colt, brown with white spots on his front coronets and white hind ankles.  Unlike the stubborn Axtell, he was kind and gentle, and remained so always.  He loved to frisk about playfully when Williams took him out for a jog and at times becames so animated he could scarcely keep his feet on the ground.  Allerton began his career at Keokuk as a two-year-old in the fall of 1888.  Black Wing won the first two heats in 2:54 and 2:52, but Allerton took the last three in 2:52, 2:50, and 3:10, a victory which clearly demonstrated his staying qualities.  (more of his times are recorded in “The Palimpsets” a monthly historical pamphlet published by the State Historical Society of Iwa – Oct. 1965)  This publication is still for sale by the Buchanan Co. Historical Society  P.O. Box 321  Independence, Ia 50644 for $10.00.  There is also a Currier and Ives painting of Allerton on the back cover of the pamphlet.  The Lexingon, Kentucky meet closed Allerton’s great races for 1891 and he retired for the winter with the world’s stallion record of 2:09 ¼ made in an exhibition on the kite track at Independence on September 19, 1891.  In 1892 he was retired after an injury and never raced again.  When Williams traded his horses for Canadian land, Allterton went with the rest but not as a part of the sale.  Provision was made for the noble horse, then eighteen years old, to be given a comfortable home at Indianola, Iowa until his death.  Word in the Bulletin-Journal dated July 7, 1910 states “a dispatch from Indianola brings the intelligence that the famous trotting stallion and sire, Allerton, 2:09 ¼, died at the home of his owner, Harry E. Hoper, near that town Tuesday.”

At the Buchanan County, Iowa fair of August, 1889, Axtell and Allerton met head-on in a special race.  The race was close but Allerton beat out his more famous stable mate in a good time of 2:22. 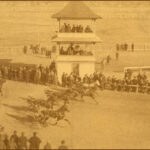 Axtell on the cover of the Palimpsest book 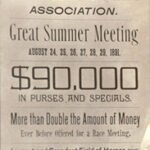 Flyer from the horse races 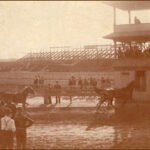