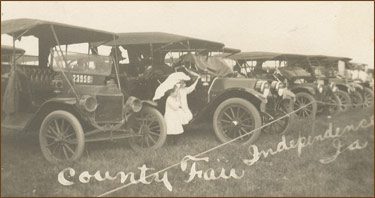 4th of July at the Buchanan County Fair

1857 – Appeared in the Independence Civilian a small news item of great interest suggesting that there be formed a “County Agricultural Fair”.

1858 – The first county fair was held in Independence on Oct. 13-14, 1858.  A Buchanan Co. Agricultural Society was organized on March 20, 1858.  A Board of Managers, comprising of 5 residents from each township in the county was named for each of the 11 townships in the youthful county of Buchanan.  Featured attractions included the livestock division, equestrian performances, plowing matches, and various commodities and products that were manufactured in the county were also exhibited.  This exhibition was to take place at the ‘race course’ which then occupied the grounds of the First Presbyterian Church on 1st St. W.  This society, deeming an agricultural fair one of the most important interests of a farming community, continued in existence but about four years.  (This was the first of three different sites that the Buchanan Co. Fair has occupied.)

1866 – A second society was organized held two fairs, very much of the same character as the previous one and was then abandoned like the other.  Neither of these societies owned any ground or real estate.

1869 – The next agricultural association was organized.  Purchased 60 acres of land owned by James Burns, which was located a half-mile west of Independence.  (Later to become Rush Park)  They had built a stable, floral hall, a graded half-mile race track and a main hall.  Surrounding the entire area was a board fence.

1880’s – “Racing Fever” hit Buchanan Co. residents and the agricultural fair became better known as the Independence Races.  The property purchased by C.W. Williams. It was late in the afternoon of the last day of the Buchanan County Fair at Independence still west of town, that the famous race between Allerton and Axtell was held.

1886 – A County Agricultural Society was again organized.  During the 1890’s interest waned in the county fairs and it probably could be blamed partially on enthusiasm by young and old in harness horse racing.  The intentions were good but not very successful.

1891 –Third site/ Purchased 30 acres north of the Illinois Central Depot grounds, and in the spring began improving it for the permanent county fair grounds (the same size as that of today).

1904 – Carrie Nation spoke before a crowd of 7,000 persons.  She gave a temperance talk and was well received by the audience.  She did not bring out her famous hatchet to chop down the interiors of any local saloons or taverns although there was a brisk business at the fairgrounds in the sale of souvenir hatchets made famous by Mrs. Nation.

1909 – The Buchanan County Fair Association was reorganized and a stock company was formed.   The fairs were not only famous for the produce and livestock exhibited but outstanding and novel thrill shows and ‘death-defying’ stunts which attracted thrill seekers from near and far.

1908 – Advertised a balloon ascension and a parachute jump.  In addition to these outstanding features there were baseball games and races for boys, men and horses.  One of the biggest attractions was the famous locomotive ‘collision’ which was bulled as the feature attraction.  One of the biggest crowds in the fair’s history had gathered in the grandstand to witness the collision between two 80-ton iron horses.  The fires in the two locomotives burned and the steam pressure was building up while the crowd anxiously waited to watch the two engines, standing on a specially built track in front of the grandstand, ram together.  But there was a slight hitch in the plans as the promoter had failed to pay for the locomotives and the owner of the two engines stopped the show.  The promoter had to seek hiding in the Illinois Central depot until an angry crowd disbursed when they found out the show would not go on.

1911 – Otto Brodie flew his ‘flying machine’ and impressed a bewildered throng of spectators.

1912 – The ‘giveaway’ craze hit Buchanan County and a newfangled machine called an automobile was awarded at a drawing.

1913 – Extensive improvements were made on the grounds, an addition equal in size to the original amphitheater was built on the north side of the old one, new gates, gate-ways, fences, stalls etc. were added.  The fair drew big crowds who came to see some ‘high-diving’ horses.  The horses were trained to dive from a platform which was 30 feet in the air into a 20 ft. tank of water.

1914 – Mickey McGuire, “The Wild Irish Rose”, was the featured performer at the county when he piloted his spectacular aeronaut before the crowds and performed thrilling and ‘hair-raising’ feats.

1915 – About 1000 people came to the log cabin raising.  The raising began at 8am and continued through the day.

1937 – An exhibit of 540 head of livestock; nine stellar free acts; far and away the best and biggest midway ever seen here was the universal verdict.  The Gold Medal Shows occupy thousands of feet of midway space.

1945 – One of the outstanding features included an auto daredevil jumping a car over a long bus.

1947 – The race track was lighted.  It was the only lighted horse racing oval west of the Mississippi.  Grady Gates, secretary turned the lights on.  A new race horse barn was added and they remodeled the hog barn.

In more recent years the Buchanan County Fair has been considered one of the best county fairs in Iowa.  Success of these annual fairs are based largely on the fine exhibits of livestock by county youngsters in F.F.A. and 4-H and by housewives throughout the county who entered garden produce, canned goods, baked goods and other items for judging.

1958 – Saw the Centennial Fair.  Showers disrupted the Newberry Thrill Show.  Ball games, Youth on Parade, talent show, horse races, Ice Follies and the awarding of a gift car filled out the agenda of the fair.

1959 – A new pole-type cattle barn was completed in time for the 1959 Buchanan County Fair.  This was put up by volunteer help.

1960’s – An end of a era for the harness racing when stock car racing on a dirt track came to the Buchanan Co. Fairgrounds (and it still survives to this day )

1964 – A plaque was given to George McArthur.  It showed the building had been named after him.  He had been a member of the board since 1926.  McArthur Floral Hall was the exhibit area for local growers and all the ‘one-room’ schools had an area to show unusual displays that they had made during the school year, with awards being given.  Many will remember the ‘County Home School’ and Bertha Ulm, teacher – who won many awards during the years.

1968 – The gate admission was dropped.  The only fee was for the grandstand show.

1970’s – The Thom Building was completed in the 1970’s.  A new 4-H building was built when a heavy snow collapsed the roof of the Dreamland.  A new Black Pavilion building was built after a fire was set by children playing with matches in one of the older buildings.

1972 – The town of Independence was celebrating their 125th anniversary and many of the programs were at the fairgrounds.  The Buchanan Co. Historical Society opened “Gateway to the Past” agricultural exhibit in the remodeled horse-show barn.  Which now has been moved to Heartland Acres Agribition Center.

1983 – Tim Chitwood Thrill Show was the main attraction.  There  was also the first Hog Wrestling Contest.  One thousand entries were exhibited by 28 4-H clubs.

Many 4-H’ers remember all the fun times they had during their early years at the county fair.  The 4-H building also has seen many wedding receptions, parties, and Bingo. 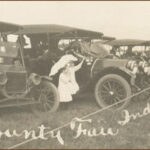 4th of July at the Buchanan County Fair 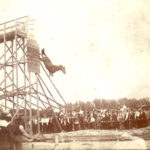 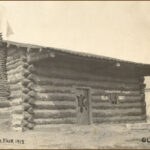