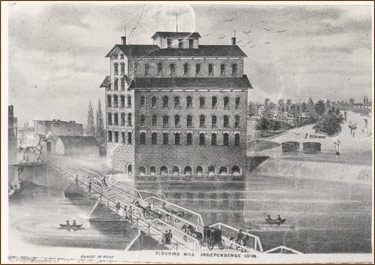 Drawing of the Wapsipinicon Mill and bridge

This artist sketch or picture was found on an 1870 map of Buchanan County, Iowa.  It was probably drawn in 1868 or 1869 before the mill was completed.  Maps were generally dated with the publishing date to make the map more current.  New Haven Mill stood in front of the Mill until August of 1870.  This might be the reason the stone work, from the arches to the first floor windows is a bit longer than necessary.

Both Mills are remarkably alike, even after 146 years (2016).  Two chimneys located at the north and south ends of the 1870 mill provided the only source of heat in the building.  The southern chimney can still be traced down through the building on the first floor to where the old pot bellies stove warmed the miller tending the buhr wheels.  An interesting feature can be found on the top floor, where, in order to make the chimney meet the roof properly, the bricks are laid in a slant to the ridge pole.

The Mill was placed on the bed rock of the Wapsipinicon River.  The 1870 Mill stands isolated like a boat in the ocean, while the present day Mill is surrounded by earth.  Sometime in the past 146 years, over twenty-five feet of earth has been added to raise the ground level.  In the 1914 Buchanan Co. History it states “Independence in the Early 1860’s:  the streets in Independence in the early days were always in a dreadful condition.  They were uneven and muddy. The sidewalks were a menace to life and limb.  The first sidewalks in town were of oak, or elm boards, often twisted and full of splinters – when pine planks were introduced it was considered a great improvement.  Not until 1864 was a grade established on Main Street; before that time the merchants had built according to their fancies and the inclines and declivities of the street.  At the EAST END of the bridge, the street was some five or six feet lower than it is now and every time the river was very high that portion of the bridge and street were inundated.  This was greatly improved after the grade was established – Main Street was ploughed up and leveled – excavating was done from Walnut Street (3rd Ave. NE) east, and filling in from Walnut street west to the bridge and the bridge was raised up five feet, at the east end.”

The first floor of the mill (1870) has become the basement floor of present day.  We enter the Wapsipinicon Mill on what was designed by Samuel Sherwood, to be the second floor.

The use of the two square wooden structures located north of the building in the mill pond is unknown to us.  The possibility exists that they might be the old dredge named “Mary Ann”.  This dredge was located in the millpond and used for over twenty years until it was washed down the river in March 1901.  Another possibility might be storage barns for ice cakes that were sawed from the river during the winter months.

The Mill dam provided the power source for the turbine designed by Samuel Sherwood.  It is located some ten to twelve feet north of the eastern foundation wall.  Our present dam (built 1909) is located under the window on the same eastern wall.

Upriver the island, in the middle of the river, stood until about 1950 when huge ice chunks washed it away.  The island played in the fourth of July celebration in 1876.  It was decided to reinact the memorable duel of Chesapeake Bay, between the first “Monitor” and the “Merrimac”. Considerable time and expense, about $300. was expended in preparations for the event.  A “Monitor” was built, Burr’s paddle wheel please boat was fitted up to play the part of the rebel army and the other arrangements were perfect in detail.  At the appointed hour, the Merrimac steamed out from behind the head of the island and bore down upon a number of boats rigged as ships, with paper sails, etc., placed at convenient intervals, poured broadsides into them, with bombs rammed them and finally set them on fire.  She then engaged the ‘shore batteries’ and a vigorous exchange of fireworks ensured.  By this time, she had reached the foot of the island when she met her fate in the shape of a ‘Monitor’ which was the exciting feature of the whole program.  The battle raged with savage fury.  The Merrimac retreated and grounded and the ‘cheese box’ in the meantime poured hot shot into her until finally her magazine was reached and she blew up into several small pieces and victory crowned the Union champion.  An immense crowd was in Independence to witness this and all the other fire attractions prepared for the event.

Another smaller island on the east side of the river also met the same fate as the above island with ice chunks washing it away.

The large stone house (seen the drawing) located just west, past the mill, is the Herrick home.  Torn down for a gas station and now in 2016 is the property where “Burger King” is located.  Mr. Herrick was the local jeweler. 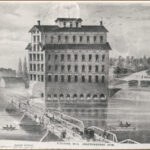 Drawing of the Wapsipinicon Mill and bridge 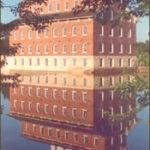