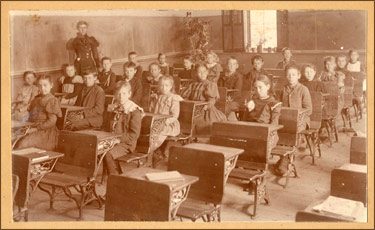 During the mid 1930’s, the banks began to release their money.  As the depression subsided, the schools were able to pick up the taxes and were able to raise the teachers’ wages.  The county superintendent suggested to Washington and Hazleton Townships that they replace the two schools in each township.  Since a 45% Grant from the Federal Government could be obtained, the townships followed the superintendent’s suggestion.  Hazleton Township elected to replace schools #1 and #5, #1 being located at Coytown (northeast of Hazleton) and #5 located east of Bryantsburg one mile and north one mile.

Washington Township decided to replace schools #5, north of Independence and the McDonnell school located west of the Country Club.

Mr. Roland Netcott designed the schools and had general supervision of their construction.  They were probably completed about 1937.  The Federal  Government stood 45% of the construction cost, with work being completed by the P.W.A. Project (Public Works Administration).  The cost was approximately $4,300.00 for the schools built in Washington Township.  Those built in Hazleton Township were two feet shorter and cost approximately $4,150.00.

The original plan of the Historical Society was to keep it as ‘an old school house’ for the public to view.  However, at about this time, the classes for the mentally retarded children were looking for a place for the trainable children to go to school.  The Society President at that time, Jim Martin, made an agreement with the school board to rent the school if the Society would do the necessary remodeling to meet the standards set by the fire marshal.  The building was put on a foundation, a basement was dug where the restrooms were to be located, the furnace was installed, and a wide sidewalk was laid from the street to the front door.  Cement was laid near the road so entry to buses and cars could be gained.  However, the Society ran out of funds and encountered problems meeting standards of the fire marshal.

The move was this time to First St. West and is now the retail business of “The Little Red School House”. 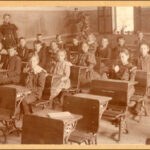