Legend of the Wapsipinicon River 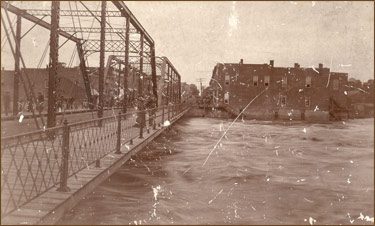 Bridge over the Wapsi

How did the Wapsipinicon River get its name?  Stories about the Indian naming of the river are both dramatic and romantic, and provide an interesting legend for the “Wapsi”.

In a 1941 State Historical Society of Iowa publication, “Iowa – The Rivers of Her Valleys,” William Petersen presents the story of the beautiful Indian maiden named Wapsi who once lived in a village near present-day Quasqueton.  In a neighboring village lived Pinicon, son of an Indian chief and the ardent lover of the gentle Wapsi.  On the eve of their wedding day, the two lovers were canoeing near Wapsi’s village when the jealous Fleet Foot, a former suitor of the Indian girl, drove an arrow into Pinicon’s heart.  As wapsi sprang to the aid of Pinicon the canoe overturned and the two lovers sank beneath the water of the swiftly flowing river.  In commemoration of this tragic event the sorrowing Indians combined the names of the two lovers and called the stream Wapsipinicon.

Other publications present a different twist to the story.  The History of Buchanan County, first published in 1881, tells a different story.  In this story the sexes are reversed, Wapsi a young warrior and Pinicon is the daughter of an Indian chief.  Wapsi and Pinicon were engaged in an intertribal love affair.  They eloped, but were found by Pinicon’s father and the other chiefs.  The couple decided they would rather die than be taken back and separated.  They raced to the river, clasped each other, leaped into the stream and drowned in the swirling waters.  The sorrowful Indian chief later named the stream Wapsipinicon.

The romantic Indian legends of Wapsi and Pinicon make for interesting folklore, but are not well-founded historically.  The literal translation of the beautiful name is White Potato River or Swan Apple River.  The translations refer to the white artichokes which grew along the banks of the river.

The spelling of the name was not settled until 1850.  Old spellings for the Wapsi include.

The Wapsipinicon is one of the most beautiful rivers in Iowa.  Where the Wapsi flows through Buchanan County it has retained so many of its natural features that the state has designated the stretch of river a Protected Waters Area (PWA).  As a PWA, the Wapsipinicon River is given priority as a river worth protecting and preserving for future generations.

HISTORIC CRESTS FOR THE WAPSIPINICON RIVER AT INDEPENDENCE 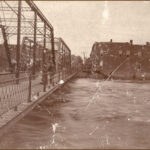 Bridge over the Wapsi 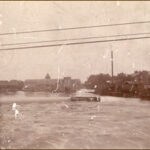