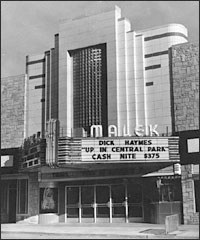 The Malek Theatre opened in 1946 on land previously occupied by the Grand Theatre and was constructed in the still popular style of the age – ART DECO.  The Malek was part of what was known as the Gedney Block, which contained a theater and a grand hotel called the Gedney Hotel, which was a getaway for wealthy patrons who came from larger cities to gamble at a local horse race park – Rush Park circa 1890’s.

The Grand burned to the ground in 1945 and its owner, Bob Malek, decided to build a new theater and named it, aptly, the Malek Theatre.  The new theatre was the patron’s dream for that era, containing two rooms for private viewings, each with doors and thick paned glass to eliminate sound in or out.

The building measures 60×140 feet and is 42 feet high.  The exterior is built of Lannon stone, vitreolite and glass block.  It is 100% fireproof and is equipped with the latest equipment and fixtures (1946 quote).  Decorations include gray, gold and surf green with the floor carpeted with a mulberry colored rug.  Two ramps running from either side of the lounge lead directly into the auditorium and stadium.  The floor of the theatre is pitched at a deep angle to assure every person maximum vision.  Seats are scattered in order that the audience can look between persons ahead.  There are no columns to obstruct the patron’s view.  To the rear of the auditorium is the projection booth which is equipped with two post-war Motiograph machines.  Four steps on either side connect the floor of the auditorium with the stage, which measures 32×17 feet.  The curtains, which will swing back and forth before and after the feature movie, are done in gold plush, surf green damask and glass fiber.  They are automatically controlled.  A ‘sound-proof’ crying room and a ‘party room’ is in addition to the balcony seating.  The theatre cost $140,000 to build, and it took a year to complete.

An artist and decorator from California painted a lovely scroll around the outer lobby ceiling.  A pretty border was also hand painted in the ladies restroom.  (restored 2004).  Five doors separated the outer lobby and inner lobby so that if a crowd gathered for the second show their noise didn’t bother the people inside.

An aerial photo was taken and blown up to 21ft x 14ft. and it was placed in the inner, outer lobby with drapes on the side.  (now owned by the Buchanan Co. Historical Society).

On Tuesday, Oct. 29, 1946, the Malek Theater – Iowa’s Finest Theatre”, opened its doors to patrons anxiously awaiting the special premiere.  It was billed as the most beautiful and comfortable theatre in the state.  It could seat 862 in comfort.

This theatre has continued through the years, with the Malek’s ownership through 1978.  The theatre underwent a duplexing in the mid 1980’s, a nationwide phenomena common today, despised by theatre purists for the architectural disrespect it pays aging auditoriums, but much desired by theatre owners who’ve seen the arrival of yet another threat to their livelihood, the video cassette and CD.

Obviously, an under-utilized auditorium capable of showing only one picture at a time isn’t an efficient operation.  In Independence, duplexing gave back to theater patrons something they had not had since the closing of the Iowa Theatre, a choice.

Despite the investment, the newly split theatre closed for a short time in 1985, leaving the county with no theatre.  The new owners (in 1992) have since taken out the duplexing and returned it to the one auditorium and are in the restoration process of the repainting of the lovely scrolls in the lobby area.

In 2020 a non-profit group was organized. Restoration continues as grants, fundraisers and donations are obtained.

The building is listed on the National Register of Historic Places. 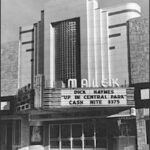