Mr. Richard Campbell purchased 13 acres of ground in the southeast part of Independence to be used as a cemetery.  With Edward Ross as a partner, the first section of Oakgrove Cemetery as it was then called, was laid out and a plot of the same was filed in the Buchanan County Courthouse.  The first lot was sold to a Mr. P.A. Older on June 9, 1868.  By 1870, some 100 lots had been sold and several burials made.  Among them, most of the burials from the old Independence Cemetery.  On June 13, 1864, Richard Campbell bought his partner’s interest from Edward Ross and became the sole owner of Oakwood Cemetery.  The name Oakgrove evolved into Oakwood cemetery as time progressed.  It again became apparent in the 1870’s that it would be necessary to enlarge the cemetery.  A plot to the west side of Oakwood was filed with the County Recorder on June 22, 1877.  Mr. Campbell continued to operate the cemetery until his death on Oct. 28, 1902.  Alonzo Campbell, a son of Richard Campbell, inherited the unsold portions of Oakwood and operated the cemetery until 1924.  Since that time Oakwood cemetery has been owned and operated by the Oakwood Cemetery Association.  The Oakwood Cemetery Association was formed by members of the local Order of Eastern Star, Rebekah Lodge, and the Sisters of the P.E.O..  The purpose of the association was to assist in the care and upkeep of the cemetery and to raise funds.  Every year a house call was made on every citizen of Independence to raise funds.  The first meeting was held at the home of Mrs. Alice Herrick, on April 4, 1901.  The following officers were elected:

In April of 1902 the association decided to accept as members, anyone expressing an interest in the care and upkeep of the cemetery, and no longer limited membership to members of the above mentioned lodges.  The association at that time limited itself to raising money, organizing workdays and similar projects.  In April of 1905 Articles of Incorporation were published, explaining the purpose of the Association.  Before assuming control of the cemetery and ownership of all unsold lots, in 1924 they built a tool house, located on the same site as the present tool house built in 1975.  This was done by a very extensive fund raising project.  A total of $317.44 was raised by door to door collections.  Two $50.00 gifts from Mrs. Agnes Shellito and Mrs. Nellie Shellito brought the total to $417.44.  The balance of the funds were collected by assessment of the lot owners.  The total cost of the building in the spring of 1924 was $752.00.

The wrought iron fence constructed in 1873 and cemetery urns, vases and settees were all fashioned by blacksmith, Frank Megow, of the Star Foundry, Independence, Iowa.  The Edwards Angel was created by J. Lundy, and Independence Stonecutter.  The oldest date in the cemetery is 1843 and the oldest headstone is 1848.  There are more graves than the population of Independence.

In the spring of 1976, Oakwood Cemetery in Independence was nominated and placed on the “State Register of Historic Places”.  Due to a quirk in the federal law, cemeteries cannot be listed on the National Historic Register.  In the spring of 1974 the Oakwood Cemetery Improvement Committee was formed to assist citizens in repairing and replacing the old stones on new foundations.  It has been quite an involved community effort

In 1976-1980 the Buchanan Co. Genealogical Society was formed and inventoried all the cemeteries in the county (including Oakwood).  It is with this original effort that these updated records are now being recorded.

The wrought iron fence constructed in 1873 and cemetery urns, vases and settees were all fashioned by blacksmith, Frank Megow, of the Star Foundry  Independence, Iowa.  (his foundry located next to the river by the sale-barn).  The Edwards Angel was created by J. Lundy, an Independence Stonecutter.  The oldest date in the cemetery is 1843 and the oldest headstone is 1848.  There are more graves than the population of Independence.

Some of the early Independence merchants are buried in this cemetery, as well as the first Mayor, Capt. D.S. Lee.  C.W. Williams and family are also buried here, and in 1976, the Bicentennial Capsule.

Cemetery book indicated burials with HEAD STONES.  If there isn’t a stone,  it did not get recorded by the genealogical efforts during the 1976 era.

BURIALS WITH NO STONES   these can either be “witched” with 2 clothes hangers bent to cross, or by a steel probe with point.  If the probe stops with a ‘thunk’ that indicates a vault.  If it sinks lower it will indicate a ‘void spot’ where a wooden coffin would be.

Agreed by Board Members that the ultimate goal would be to turn over the maintenance of the cemetery (along with the perpetual care fund) to the city.  The Iowa Code provides legal means for this to be accomplished should the city refuse a second time to accept this responsibility.

Motion that “effective July 1, 2005, the Board of Directors of the Oakwood Cemetery Assn. Relinquish all funds (including perpetual care fund) in their charge, to the City of Independence.  In doing so, the City takes responsibility and liability of upkeep and ownership of the said Oakwood Cemetery  Independence, Iowa.  The President and Secretary are authorized to sign all necessary paperwork.”  Passed

Dear Ladies and Gentlemen:
It is with mixed feelings that we, the members of the Oakwood Cemetery Association, relinquish control of Oakwood Cemetery to the City of Independence.  Our primary reason for taking this action is that the Perpetual Care Trust Fund simply does not generate enough income annually to properly maintain the cemetery.

The City will receive along with a Quit Claim Deed, certificates of deposit totaling $93,000, the principle of the Trust Fund.  It is our understanding according to the Iowa Code that this endowment must remain an endowment, and that presumably in the future, money could be added to it through bequests or gifts.  We will also be giving the City a CD that will indicate who is buried where.  This is being transferred from the cemetery book to CD by John Klotzbach.

While we realize that this gift to the City must be without strings, beyond those stated in the Iowa Code, we do hope that this council and future councils will appreciate the historical significance this cemetery holds for our community.  Its location on the south entry to Independence makes it imperative that it be well maintained – better than we’ve been able to do these past years.  This seems especially true now that so much major development is going on south of town.  The iron fence is of considerable value, and it seems to us that it should be restored.  (See the attached history of Oakwood Cemetery.)  Many of the old monuments need repair.  Finally, there’s the ongoing need for mowing and trimming grass, trimming trees and shrubbery, and removing fallen limbs and trees.

All the members of the Association join me in thanking the City of Independence for taking on this responsibility. 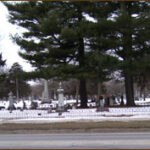