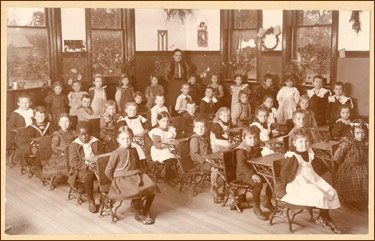 Had two entrances  –  one for the girls and one for the boys.  Proper desks were purchased to replace the shelves and benches of an earlier era.  The girls sat on one side of the room, and the boys on the other.  The youngest children sat at the front of the classroom, close to the teacher.  Behind the teacher was a blackboard.  A wood stove heated the classroom.

Early teachers did not have the special training that teachers have today.  Many male teachers were retired soldiers who knew how to read and write and needed a job after leaving the army.

One teacher instructed all the children in the school.  He or she taught as many as eight grades at a time.  The class was divided into four groups, each with an upper and lower grade.  If there were many children in a community, only the older students were allowed to attend school during the school year.  A female teacher was hired to teach the younger children during the summer months.

The teacher did more than teach the children.  He or she also had to keep order in the school.  With children of all ages learning different things at the same time, good behavior was important.  It was the responsibility of the teacher to punish children who misbehaved.

After the students went home, the teacher made sure the classroom was tidy for the next day.  Teachers rarely had enough time to teach more than three subjects.  The three subjects, or the “three Rs,” of early education were reading, writing, and arithmetic – or “reading, ‘riting, and ‘rithmetic.”

Arithmetic was taught by DRILL.  Children learned to add, subtract, multiply, and divide by solving problems in their head.  They had to know the answers as soon as the teacher flashed the cards.

Schoolbooks and writing paper were scare in settler times.  Students did much of their learning by ROTE, which meant memorizing long poems and stories and reciting them to the teacher.  Students also had to write and deliver speeches.

In geography class, students memorized the names of countries, capital cities, lakes, rivers, and mountains.  If the school had a globe, the teacher spun it so fast that it became a colorful blur.  He or she suddenly stopped the spinning globe and pointed to a location to be named by the students.

The most popular readers of the nineteenth century were the Eclectic Readers by William Holmes McGuffey.  This set of six readers began with a primer.  Each volume increased in difficulty.  Children in the one-room school advanced through the readers at their own pace.  Not only did the McGuffey Readers teach children how to read, they also taught values such as honesty, courage, charity, and good manners.

Settler students did not have pens as we have today.  Instead, they dipped sharpened goose feathers, called QUILLS, in ink.  Keeping quill pens sharp was one of the duties of the teacher, but sometimes this job was done by responsible, older students.  Writing with a quill pen left a lot of wet ink on a page.  To prevent smudging, students covered the page with blotting paper after they finished writing.  They pressed the paper down on the page to absorb the extra ink.

Slates and pencils were made of hard rock.  Students wrote by scratching the slate with their pencils.  After several years, a slate was covered with hundreds of scratches.  Modern chalk is much gentler on blackboards.

Early schools were cold in the winter!  The only source of heat in a one-room school came from a wood stove located in the center of the room.  Some families supplied the school with wood for the stove.  The children had to walk to school carrying an armful of firewood.  Each morning a different child was responsible for starting the fire before the other children arrived.

Keeping the schoolhouse clean was not an easy job.  The teacher had to ensure that the chimney was clear of soot so the class would not be ‘smoked out’.  Each day the floors were swept and the blackboards cleaned.  The windows of the school, which allowed in the only light in the room, needed frequent washing.

Since students shared the same classroom for as many as eight years, they heard the lessons of other classes year after year.  They remembered these lessons long after they finished school.  It was difficult to work when the room was filled with the screeching and scratching of slate pencils against slates.

The ringing of the teacher’s bell signaled the beginning of the school day.  As the children entered the school, they ‘made their manners’, bowing and curtsying to the teacher.  Opening exercises began with the Lord’s Prayer, Bible readings, and roll call.  Anyone who was not present during roll call waited outside until recess—even on bitterly cold winter days!

Each morning students walked to school swinging their lunch baskets and tin pails.  Their lunches often included homemade bread smothered with jam.  Donuts were a tasty treat – if they didn’t get mushed in the lunchpail!  Some children brought pie for dessert.  Most pies were like turnovers with thick crusts and juicy fruit filling.

At some schools, children took turns bringing a pail of milk to school each day.  At lunchtime they placed the bucket of milk on the stove.  Students looked forward to having hot cocoa with their lunch.  Sometimes they forgot to loosen the lid of the pail, which caused an explosion that sent scalding milk flying to the ceiling.  Fortunately, these accidents rarely occurred.

In the wintertime many students carried half-baked potatoes to school.  The potatoes, which had been heated before the children left for school, kept little hands warm during the long, cold walk.  Students finished cooking the potatoes on the wood stove at school.

Students had a short recess break in the morning and afternoon.  They rushed outdoors to play games, talk, or explore the nearby woods.

Settler children made many of their recess toys from items they found at home or in town.  Yarn that came from old unraveled sweaters was rolled into balls for playing catch.  Thick twigs were carved into whistles.  Barrel staves became the runners of speedy sleds called SKIPJACKS.  Younger children enjoyed singing games such as “Ring Around the Rosy” and “Farmer in the Dell.”

“Bad” behavior led to any one of a number of punishments.  Sometimes children were ordered to memorize long passages or write lines over and over.  Teachers also shamed their students by making them wear a “dunce cap” or a sign around their neck.  Some students were forced to balance on a block of wood in a corner of the classroom.  One of the most common punishments was getting a whipping with a hickory switch or a birch rod.  Sometimes the strapping was so severe that students went home with red marks across their legs.

Every Friday, school ended with a ‘spell-down’, or ‘spelling bee’.  Two of the older students picked teams.  The children took turns spelling words that were read aloud by the teacher.  If someone misspelled a word, he or she was out of the game and had to sit down.   The bee ended when only one person was left standing.  The winner was a school celebrity until the next spelling bee.  Everyone admired the person who could ‘spell down’ the entire school.

Near the end of the school year the students were given an oral examination by the teacher.  Students had to spell, solve arithmetic problems, and answer questions on a variety of subjects.

The last day of school was a happy occasion for feasting, games, and dancing.

Are you too young to remember the ‘good old days’ when “Readin’ and writing’ and ‘rithmetic were taught to the tune of the hickory stick?”

The old hickory stick..or willow switch..has yielded to the Scythe of Time, but the Three R’s, although battered and muted almost beyond recognition by experimentations and innovations, have managed to maintain a firm foothold.

Equipment as we know it today was almost non-existent.  The old coal shovel was perhaps the most versatile too!…it not only scooped coat into the scuttle..it also dragged ashes and clinkers from under the furnace grates..bulldozed paths to the little houses out back..and chopped snakes that were bold enough to sun themselves by the door

The grading also was different..a child either KNEW his facts..he partially knew them..or he DIDN’T know them…it was as simple as that.  Many educators deride the mastering of factual knowledge as being dictatorial or even useless, since things keep changing.  But all facts do not change, and many basic facts serve as posts from which to hang lines of imagination and from which to evolve one’s own personal philosophy.

Modern math had not yet slid down from college to elementary level.  Kids knew nothing of algebraic number sentences nor such terms as commutative and associative principles.  But they could compute how many bushels of corn a crib would hold, and how many rolls of wallpaper were needed to paper their bedroom at home.

Simple as it sounds to speak of the 3 R’s, much deeper learning took place.  Psychologists were practically unheard of in rural schools, but group therapy was in full swing.  Passersby never saw children crunched against the door, waiting for the bell to call them in.  Rather, recess was exuberant and creative playtime.  The ball games developed a sense of “Good Samaritanship,” as the big boys pitched slow easy balls right straight at the bat so the little five-year-olds could make a hit.  Winning was not the ultimate goal..FUN was the name of the game.

The rapport between the tiniest child and the VIP (County Superintendent) was so friendly and casual that the VIP could walk unannounced into the classroom, carrying and stroking a large cat, cradled comfortably in his arms…thus creating barely-suppressed havoc and delight among the small fry.  Pupils respected those in authority, yet had no fear of them.  Surely, with the mellow sheen of much-used sterling, the country school will glow in antiquity.

And WERE most school houses RED?  I don’t think so.  But they were the foundation of our educational institutions today..and long may they live in the hearts and minds of Americans. 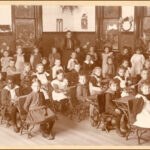