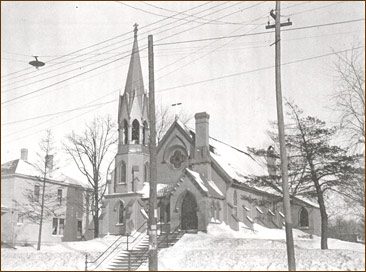 The first church service held in Independence by a group of Episcopalians was on July 31, 1856 in the Methodist chapel.  The Right Rev. Henry Washington Lee, D.D., L.L.D., bishop of Iowa officiated.

In February, 1858, the Rev. Benjamin R. Gifford held services for the group in the German Presbyterian Church here and a parish was organized under the name “Church of the Messiah”.

The names on the first vestry were Rev. Reuben Freeman, J.D. Myers, H.S. Chase, R.W. Wright, Thomas Scarcliff, Thomas Close, G.B. Thomas and William Scott.  Mrs. Harriet Woodruff and Miss Sarah Homans were among the communicants at that time.  Mrs. Woodruff and Miss Homans played a prominent part in the teaching field at that time and for many years after.

Monthly services were held for the group in the Wasshic and Morse Hall, the courthouse, Brown’s Hall and the Presbyterian church, which is now Freedom Baptist.

Thomas Scarcliff, in 1863, purchased lots for $200 where now stands the church and the post office.  He gave the lots to his church.

On September 9, 1863, the corner stone for the Episcopal Church building was laid by the rector, the Rev. Hale Townsend, on Chatham street (now 2nd Ave. NE) just above Mott Street (the same location as it is today).

The first service was held in the new church on Christmas  1863, and the building was consecrated by the Rt. Rev. Bishop Lee on May 8, 1864.  The original cost was $1,750. and the name of the parish was changed to St. James.

The Rev. Chester Smith Percival served the church as rector from 1871 to 1873.  During his stay in Independence, he wrote the first Buchanan County History from which many of these facts are taken.

In 1873, the choir and vestry room was added, as was the tower containing the bell, and the entire building was brick veneered.  These improvements were aided by the Rev. Thomas B. Kemp.  The residence on the corner south of the church was purchased for a rectory by funds left of Mrs. Clara M.B. Snow,  and a small building east of the rectory was acquired for a guild house.  A larger parish house was completed about 1915. (the residence on the corner was purchased by the Government and the post office now stands there.  The second parish house is now a private residence.)

At this time the rector of the church had charge of three missions.  They were in Quasqueton, Oelwein and Manchester.  The vestry at that time included Seth Newman and C.D. Jones, lay readers, Thomas Coghlan, George Josseyln, G.P. Hopkins, George Woodruff, William R. Kenyon, Mrs. Harriet Woodruff and organist, and William Leytze, librarian.

The Megow family were early members of this church and Mr. Frank Megow owned and operated the “Star Foundry” near the river on 3rd Street and Corrinne Ave. NE.  Mr. Megow and his legacy can still be found in Independence – the railing on the steps of his church (St. James), the fence around Oakwood Cemetery, urns, benches, and lawn furniture, and many trim pieces on the fronts of downtown buildings. Several of the “Star Foundry” Megow itesm are now on display in at the Wapsipinicon Mill.

Among the rectors who will be remembered by present day residents were the Rev. Charles Mee, and the Rev. O.J. Scovell who organized a boy’s choir.  These boys held a yearly camp each summer at the Devil’s Back Bone Park, which became so large that it included nearly all the members of the parish and their friends.  It was quite a problem to gather  equipment and food for the group.  For in those days it meant living in tents, walking to nearby farms each day for fresh eggs and butter and milk for the campers – then storing the products in buckets or crocks in the ‘spring’.

The Rev. Charles J. Shutt became rector in 1900, and continued there for nine years.

A nucleus was established for a larger parish house under the rectorship of the Rev. Henry L. A. Fick and the Rev. Robert Fox drew the plans and completed the building of the present hall about 1915.  Among the vestrymen at this time were C.D. Jones, Thomas Scarcliff, Frank Megow, Ed Sweet, Charles Purdy, George McKee, J.W. Kuhrke, C.F. Herrick, D.W. Poor, John Burk, Robert R. Plane, Richard Swan and E. Murphy.  This list runs like a Who’s Who of the Main Street Businesses in downtown Independence.

The women of the parish in the early day followed the custom of public dinners to raise money for their church work.  Before the vogue of parish houses or large finished basements in which the suppers could be held, they had to seek other halls which were equipped for such events.

St. James Church celebrated their Centennial in July of 1956.  The Sept. 30, 1956 program celebrated the 100th anniversary (the 18th Sunday after Trinity).  October 3rd saw a centennial parish dinner with a program and an exhibit of pictures and other articles of historical interest.

In 1961 the men of St. James Church painted the exterior of the brick veneered church in a light gray with charcoal trim.  Work on the masonry, including pointing, repair of wall sections and replacement of the upper part of the chimney was also accomplished at this time.  The stained glass windows were also repaired at that time.

In 1996-2002 several ‘uplifts’ were apparent to the exterior of the church building.  In 1996 the steeple was re-roofed with wooden shingles and a new finial at the peak of the steeple.  Replaced wooden ornamental pieces along the bottom of the steeple roof were also put on.

In 2002, years of grey paint were removed giving the warm brick tones it had when the brick veneer was added in 1873.

The church celebrated 150 years in 2006.  Paperwork is being done for the National Register of Historic Places. 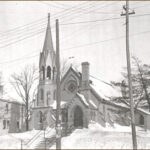