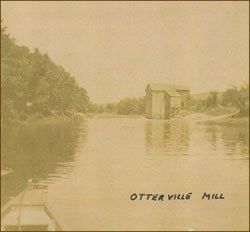 About 1863 a Grist/flouring mill was built on the north side of the swift moving Otter Creek. According to an 1886 map, Mill street became the traveled street to and from the Mill. Edward Ross owned and ran the mill in its later days. He died in 1891. A grist mill that stands idle soon became worthless. This forced his wife, Margaret (Rutherford) Ross to become the first lady miller in the state of Iowa, She ran the mill from January 1891 to February 1893. Otterville Mill manufactured two flours under the names of “Home Rule” and “Fancy Patent”. Otterville Mill burned in 1895.

A grist/flouring mill was build on the north side of the Wapsipinicon in 1856. It supplied flour for the small village of Littleton and the surrounding area. Farmers no longer had to haul the wheat to independence or Quasqueton to have it ground into flour. The high water and ice of the 1870’s ruined the dam and mill. A new three-story grist mill was build in its place. On 1886 maps the mill was names “Hovey and Kraft”. Muddy roads, chinch bugs and trains bringing in wheat to area finished the milling interest in this county. Around 1917 the log dam that provided the power was washed away and the mill stood idle until October 1927, when it was wrecked for it’s lumber.

Fontana has been a dam and mill site for more than 140 years. The first dam was build on Otter Creek, in what is now Fontana Park, in 1849 by Ike Richmond. The dam provided water power for a sawmill, and was later used to power a gristmill. Frequent wash-outs during the 19th century let to several dam modifications.

The present concrete dam was completed by Adam Kiefer, who owned the mill for the middle 1890’s until 1912. Kiefer’s son and a friend, Marty Coy, named the area “Fontania Park.” Then “Fontana” spelling later caught on and Fontana Park has since been known as a popular recreation area.

The Buchanan County Conservation Board acquired Fontana Park in 1959, and a large shelter house was built on the old mill foundation. The mill stones are on display near the shelter house along with information about how the mill once operated. The display helps relate to visitors the importance of the area’s natural resources to settlement in Northeast Iowa.

In addition to the old mill site, Fontana contains self guided woodland trails, a stream and reservoir, and a very popular live animal exhibit.

Clarkes Sold to F.J. Everette and Clarence Bacon on January 1, 1854. Bacon and Everett sold to Nicholas Harrington on June 28th, 1855. This sale now included “a saw mill and water power and all the appurtenances thereunto belonging.” This saw mill was on the east side of the river and farther upstream.

The Conable property on the west side of the river was turned over to the public on July 21, 1865 and became known as Conables Addition. Apart of this property was regarded as the Mill property.

The property on the east side of the river was returned to Everett and Bacon from Nicholas Harrington on April 21, 1859. Everett and Bacon then sold to James Hovey on June 2, 1859. James Hovey sold to Adam and Cornelius Mill November 8, 1862. This transaction made no mention of a mill. Apparently the saw mill had been abandoned. hove then must have gotten the property back because he sold it again in 1864 to Frederic Oelwein and Michael Kraft. This property now included “a grist mill and water power and all appurtenances thereunto belonging and the right to flow lands.” This grist mill was built where the dam is now.

The property where the island is located was deeded by Hanson C. Phelps and Dale Phelps on May 16, 1938, to the Adolph Fortsch American Legion Post No. 552, who0 in turn, deeded it to the town to be used for a park

All of the above properties, mill property and island are now used as parks in Fairbank.

William Bennett, the first settler in Buchanan County (in 1842) was attracted to the area by the rapids and swift running water of the Wapsipinicon River.  He realized it was a great mill site and immediately began building a log house at the foot of what is Walnut Street for his wife and three children. He then built a makeshift dam of sod and logs, after which he built the start of a mill.  It lacked most of the sides and roof that first year.

In 1843, Edwin Fulton, a merchant from Davenport who had loaned Bennett the money to construct the dam and mill, came to town and secured possession of the land claimed by Bennett.  In the meantime, a feud had developed between Bennett and William Johnson who had started a settlement halfway between Quasqueton and Independence.  After an altercation between them, Bennett was forced to depart, going first to Delaware County and then on to Wisconsin.

By then William Hadden had gained possession of the land and the mill.  In 1844 he enlarged the mill and installed corn and wheat buhr stones and other machinery.  It was then called a “Custom Mill” or one that ground grain for individual customers.  Two years later, another entrepreneur, D.S. Davis, became a partner of Mr. Hadden and they constructed a saw mill just below the grist mill.  People came from Independence and settlements as far as 60 to 80 miles away to have their corn and wheat ground into flour and to have their logs sawed into lumber.  For a short time during this period, corn, wheat and pork were taken to Dubuque by horse and wagon to be sold.

By 1852 the mills became the property of J.G. Hovey who made further improvements and was in the milling business for several years.  In 1856 J.M. Benthall came from Dubuque and he and the Lewis Brothers became the new owners.  They proceeded to tear down the older mill and build a new one below the saw mill.

By 1870 both mills were being operated by George Boone, but in 1871 the saw mill and the grist mill were purchased by the Independence Milling Company.  In 1878 the saw mill was carried away by high water and three years later, in 1881, the flour mill was consumed by fire on New Years Day.  Soon after the Plank brothers rebuilt it and stayed in business until February 16, 1910, when the wooden dam was crushed and taken out by the two foot thick ice and carried away by the high water, leaving them without water power.

Reo Adams, who owned the dam, decided not to rebuild.  The buildings were used for various things until J.H. Buchanan purchased them in the 1930’s.  He dismantled the mill, selling parts of it.  Hem moved the building, used previously for a creamery, to his home on North Water Street, using it for his feed business until it was razed in the 1980’s.

The dam has been removed and is now rock arch rapids.

Reference for this history were secured from the 1881 and the 1914 Buchanan County History books, along with the 1967 Quasquicentennial History book, several copies of the Winthrop News and the Independence Newspapers. 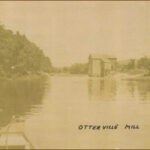