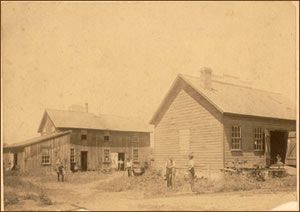 Frank Megow, owner
Located at corner of Corinne Ave.
And 3rd St. NE (near the river)

Mr. Megow was born September 11, 1848, in Germany and came to the United States in 1856.  The family settled in Montella, Wisconsin, where Frank learned the machinist trade.  In 1860 he and one of his brothers took jobs as engineers on a Mississippi River steamboat carrying logs to New Orleans.

In 1869, on one of these trips, the boat stopped at Dubuque, where the Megow brothers boarded the Illinois Central train and came to Independence to visit their only sister, Mrs. Fred Smith.  The brother returned to Dubuque and continued the boat trip, but Frank stayed here.

Frank took a temporary job in a blacksmith shop at Otterville, and eventually set up a shop of his own in Independence.

In 1873 this became known as The Foundry.  Two nights after what is known as “the big fire” in 1874 the Star Foundry and Machine Shop owned by Frank Megow was discovered to be on fire.  The steamer being disabled, and the fire having got a fair start in the dry wooden foundry building before it was discovered, all efforts to stop it were futile.  The foundry was rebuilt and in 1879 a younger brother, Will, became a partner.

The Foundry was located at the corner of Corrine and 3rd St. N.E.  In spite of high water and fire that plagued the business, its operation was continued until after the turn of the century. Many articles that had their origin in the foundry may be seen about town as evidence of a former industry.

Examples include the iron fence at Oakwood Cemetery, cemetery urns and vases, railing at St. James Episcopal Church, some main street store fronts, and frieze over Munson Public Library front door.  A centennial step for buggies (1876) and several fire escape steps on the backs of the 1870’s downtown buildings were also made in the foundry.

A set of steps from the First St. bridge to the river were used for many years before the flood of 1999 took them out.  Part of the steps are now being utilized in the Victorian Garden at the Capt. D.S. Lee Mansion,(owned by the Buchanan Co. Historical Society). 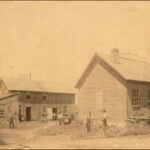